The Van Imhoff & Portrait for my Opa and Oma

Additional information has been found, including the names and short biography of those who died:

Two weekends ago was my Opa & Oma's 55th anniversary. The family threw them a really nice surprise party. It's always fun to have the whole (well, most of them) family together, and it seems like that doesn't happen often anymore. When all of us "kids" were young it seems like we were all together all the time.

For their anniversary present I painted a portrait of my Opa's father, Jacob Steinlein: 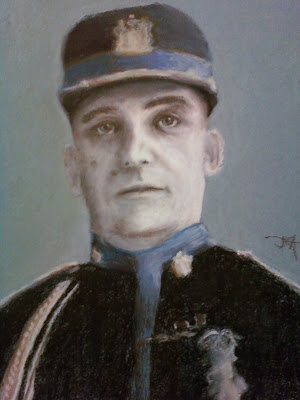 I think this was the hardest project I've ever worked on, because I really wanted it to be right. I researched about uniforms and this is what I came up with, since I was working with a black and white photo. What was also difficult for me were the emotions that staring at the old photo brought up, because there's always a story. Jacob Steinlein was German, but a Dutch citizen. Well, during WWII the Dutch imprisoned all of the Germans and shipped them from the location. Jacob was on the Van Imhoff. I've researched this a lot, because it was kind of a big cover up, since the Van Imhoff was bombed and sunk, and somehow everyone on the ship survived except for the majority of German prisoners, including my great grandfather. When I was painting this portrait I couldn't help but think about his horrible death.

Some information I found. Most of it was translated into English, so it may be hard to read:

http://sites.google.com/a/mercantilemarine.org/mercantile-marine/War-time-Stories/kom-ships
MV van Imhoff
Van Imhoff (2,980 tons) - Passenger Ship
Date of loss - January 19th, 1942
Reason for loss - Sunk by Japanese aircraft in the Indian Ocean west of Sumatra.
The infamous, unsavoury incident which was to give rise to a strange International aftermath, that dragged on for ten years and involved the 2980 ton "van Imhoff"
After the invasion of Norway, Holland, Belgium and France the most hair raising stories of Fifth Column activities in those countries circulated world wide.
There were a surprising number of Germans in the Netherlands East Indies (NEI) augmented by the crews of 20 German ships seized by the Dutch in NEI ports, totalling about 3'000.
When Japan entered the war bringing hostilities to our area of conflict, fears were this group would break out and operate as a Fifth Column for their Allies the Japanese. India was prepared to accept them, so they were shipped out in 3 groups.
The first 2 in the KPM ships "Plancius" and "Ophir"about 2,500, the last in "van Imhoff
Orders from the British and Dutch Authorities were becoming scary and in retrospect, not as rational and explicit as might have been.
On 15th January 1942. Captain Hoeksema received orders in Padang to proceed to Sibolga to embark evacuees. On arrival the next day, he discovered they were almost 500 German and NSB internees. He also had to embark a 62 military guard detachment and 100 tons of barbed wire to secure them.
"van Imhoff" an old ship and fitted with limited life saving equipment and unarmed all of which Hoeksema radioed C-in-C.
The reply short and to the point "Embark them anyway." So he scrounged a few bamboo rafts ashore and took off.
The internees were locked, securely in a couple of holds.
Many of this group were middle aged business men who had lived in the Indies for years, running camera shops or import export business and a few aggressive German seamen off the impounded ships.
The next morning out into the Indian Ocean they were bombed by Japanese planes and the ship began to sink.
Hoeksema panicked. He immediately ordered the lifeboats launched and the crew and military guards into them. One lifeboat which could not be launched was left hanging in the davits.The sergeant of the guard released the prisoners and requested as many as possible be picked up by the lifeboats. Hoeksema refused .
in his opinion the prisoners were the "enemy' there were ample lifejackets and bamboo rafts and they would have to take their chances and ordered the lifeboats to row away from the ship. They made it to shore, but many of the Germans drowned.
Many months later, news of it trickled through to Germany, the authorities in occupied Holland arrested KPM staff and transported them to German Labour
Camps. They also forced KPM to pay 4 millon guilders compensation to relatives of the drowned men.
For another ten years a group of relatives and survivors of the tragedy attempted criminal proceedings.
http://www.umass.edu/wsp/sinology/persons/zach.html
In the momentous year 1933, when German scholarship was Nazified, when Asia Major was shut down in the middle of a volume, and when Deutsche Wacht, halfway

I think Opa really appreciated it, and he said it was just how he remembered his dad, and the rest of the night I found him staring at the painting.
Posted by Neutral Ocean at 10:28 AM